I was diagnosed with HIV in 1988, I was 26.  I was struggling with alcohol & drug addiction and felt I was losing the battle. I didn't worry about HIV/AIDS, it was something happening in New York and California, not Oklahoma.  I thought I had nothing to worry about and then BAM, I was told that I was HIV+. The  counselor told me I had 10 years, if I was lucky. I sure wasn't feeling lucky! I tried again to stop drinking & drugging but found it even more difficult with the HIV+ diagnosis. It didn't matter anyway, I was going to die. I was scared, I was sad and I was ashamed. I couldn't tell anyone and I sure didn't know anyway else that had HIV.

About 9 months later on a particular blue Monday evening I decided  to go to a little neighborhood bar and have a few drinks. I had to work the next morning so I knew I had to be careful and not get too drunk. I sat at the bar and had a few Long Island Ice Teas, it was about midnight and I wasn't feeling quite as blue anymore. I decided to head home so I could get some sleep. As I was walking to my car  I was approached by a guy who told me he needed a ride home. He told me he and his boyfriend had a fight and he had been left in the bar alone. I asked which way he was headed and he told me and it was the way I was headed home as well. Without any reservations I said sure I'll give you a ride. As we left the parking lot he suggested that I take a different route than the way I was going. That was my first clue. As I was driving through downtown I realized there was a truck following us and I ask him about it. He said "oh my gosh, that's my boyfriend, don't take me home just drop me off at the river".  By this time I was feeling very concerned. I decided to pull over and ask him to get out of the car. As I turned my blinker on and  pulled over to the curb, I looked in my rearview mirror to make sure it was safe. At that moment I felt something hit my head.  As I turned to look at the rider in my car I felt another blow, this time, to my face, I realized at that moment that this guy was trying to hurt me. He never said a word, he just kept hitting my head and my face over and over again. I struggled to get out of my car and I was finally able to open my car door.  I fell to the road. As I was lying on the street, the thug in my car crawled across the front seat, grabbed my head and starting banging it on the ground. At that point my car started to roll backward as I'd not taken it out of drive and he tried to push me under my car. As I saw a tire rolling toward my face I found all the strength I had and made it to my feet. At that point the pick up truck pulled up beside my car and the thug that had been beating me jumped in the back of the truck and they sped off, I fell to my knees and began screaming. A good Samaritan who heard what was happening came out of her home after the truck sped off, she came to my rescue. She had a towel and she wrapped it around my head and she held me as I cried and screamed and she assured me that an ambulance and the police were on the way.  At this point my memory becomes cloudy, patchy. I remember laying on a stretcher in the emergency room and I remember seeing my father. The next thing I remember, I'm at my parents home laying on the couch.

As I was laying there a clear thought came into my head.  I vividly remember thinking, "if I don't forgive this guy for beating me up before I fall asleep, I'll never be the same".  I sent a quiet prayer of forgiveness for this stranger who hurt me. At that point something inside changed, I found the will to live!

About 28 years later, jump to today. I am happy, I am healthy, I am sober and I am grateful. The last 28 years have been amazing but not without sadness.  However,  I have learned how to live with the sadness but more importantly, I've learned how to live with the joy of life. I'm married to a wonderful man, I have many friends and a loving family   I've said goodbye to too many, including my mother and all of my grandparents and countless friends but I've said hello to many more.

I am grateful today for everything thing that has happened in my life. What was a  deadly diagnosis and fearing death, saved my life. Had I not been diagnosed with HIV and then gay bashed I would probably be dead today. I would've probably drank myself into a stupor, feeling sorry for myself. But that's not how it ends. 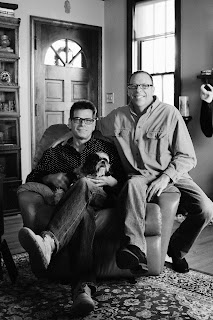